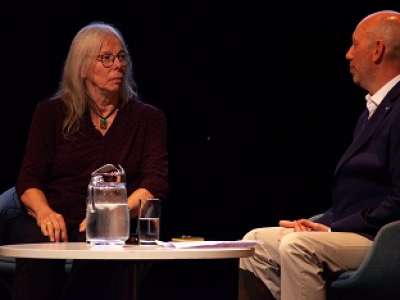 At PMG Conference 2018 Dr Lisbeth Nilsson (associated with Lund University, Sweden) was interviewed on stage by Graham Race (from Queen Elizabeth Foundation Trust, Surrey) about her Driving to Learn programme (Nilsson, E. 2007), one stream of which aimed to provide powered mobility for people with dementia. This conversational session started with Lisbeth providing some background to her current work.

In 1993, she began working with children with profound developmental and cognitive needs, looking at powered mobility as a valid occupational therapy tool, because it enables children to learn about their environment and develop relationships through mobility; in the same way as typically developing children.

Lisbeth reflected that, as time progressed, and the initial Driving to Learn programme was showing signs of success, her professional curiosity led to her wondering whether the same techniques could be used for people with dementia.  After all, Lisbeth commented, essentially this is the same barrier at opposing ends of the lifespan – developing cognition at the beginning of life and declining cognition towards the end.

She recognised that the first challenge in this new strand of work was identifying a population, and she managed eventually to forge links with a nursing home in a small village. The second, and somewhat greater challenge, was identifying which wheelchair to use. She felt it would be too problematic and risky to use a standard powered chair, so she worked with Swedish wheelchair manufacturer Permobil to develop a learning tool/chair - the C300 TIRO. The benefits of this chair are that -

Lisbeth discussed her methods for using this tool: taking it to the nursing home, connecting with the therapy staff working there, and trialling with the “easier” residents first.  She showed us videos demonstrating the success of the sessions and shared some of the feedback, e.g. “This was fun”; “This has made a difference”.  She reflected that life in a nursing home can become very monotonous, even when there are lots of planned activities, and any small change or difference to the routine becomes an event.  The use of this tool was really different, which added to the experience of fun and playfulness.

S was a lady with “quite a typical advanced dementia”.  She spent most of her time in her room; she was immobile, incontinent, would often cry, and occasionally would scream out.  None of her communication was identifiable - it was more a general vocalisation.

Lisbeth described her sessions with S:

Lisbeth showed us several clips, demonstrating how in one session S was able to control the chair to turn in circles on the spot, then began to use it to move backwards and forwards with increasing levels of control.  In time S engaged more and more, and even started using some recognisable vocalisation, e.g. telling Lisbeth to “let go” when she was trying to help. We saw S crash the chair which Lisbeth explained is crucial to allow a person to learn their environment.  Additionally, the collisions stimulate the vestibular system, which increases alertness and, consequently, a person’s attention.

13 people were involved over 53 sessions in this strand of Lisbeth’s research, with S having the most profound disability.  Unfortunately, when the research came to an end, so did the use of powered mobility with the group because the staff did not feel able to progress. Nevertheless, Lisbeth considers the project to have been a success because, despite the use of powered mobility ceasing, the way in which staff interacted with residents changed. She reflected that for people with dementia, those around them often treat them as an “empty box”.  They don’t expect to receive any interaction from this group and, as a result, may act in a very “flat” manner around them.  This project had increased interaction with the group and “no longer were its members viewed as empty boxes, but as human beings.”

Lisbeth wants more consideration given to providing powered mobility for people who would normally be deemed “unsuitable” because of their reduced cognitive ability.  She is keen for as many of these “unsuitable” people as possible to have access to powered mobility as she believes many more could benefit if they were given the opportunity.

As you might imagine, this presentation caused a great deal of discussion and debate amongst the delegates; it also gave me plenty to reflect upon.  Currently, I am the sole occupational therapist providing services on the Falkland Islands where there would probably be little demand for such a specialist training tool.  However, I do have access to some older powered wheelchairs which, with some ingenuity and adaptation, could perhaps be used to explore the provision of powered mobility for those previously deemed unsuitable.

More importantly the session made me think about how we as professionals interact with those with dementia.  Can we honestly say that we consistently interact with them in an engaging way at every single contact?  I suspect the answer is “no” because unconsciously we “mirror” the behaviour of others (Chartrand, T.L. and Bargh J.A. 1999).

Thank you to Dr Lisbeth Nilsson and Graham Race for a thoughtful and informative session which allowed both the speakers and the audience to reflect.  Going forward, I will endeavour to ensure that people who would normally be considered “unsuitable” for powered mobility because of their cognitive ability are given the opportunity to practice before a decision is made.