Why trainees should attend conferences 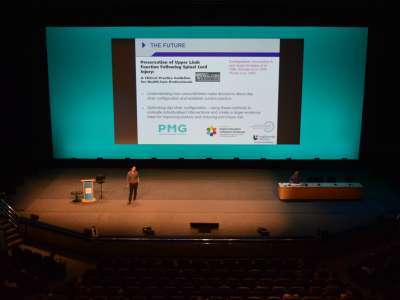 Attending conferences isn’t a routine part of most training schemes, and it’s easy for a keen trainee to let it fall by the wayside.  This report is my argument for why you definitely should attend PMG conferences!

As a trainee clinical scientist in clinical engineering, I almost didn’t, but my supervisors (always looking for ways to get me out of their hair) wisely suggested I apply for a bursary to attend PMG Conference 2016. Now, having attended, I feel I have enough experience to explain why trainees should not avoid conferences….

PMG hosts a large annual event, and 2016 saw several hundred scientists, engineers, and other assorted professionals descend like a marauding horde on an entire floor of the International Convention Centre in Birmingham; I found watching presentations to an audience this size quite an experience in itself, having never been to a large conference before. Lectures ranged from the legal side of capacity and consent to using 3D printing in rehabilitation services; from a beginner’s guide to critical appraisal to integrating wheelchairs with other assistive technology. The scientific content focussed on projects that might impact on future practice and, as trainees, there’s a lot of professional future that it could influence!

However, I probably should tell you that my favourite part of the event was trying out a two-wheeled power wheelchair, based on the technology of the Segway. If your first and last thought every day is that wheelchairs have too many wheels (everyone thinks that, right?), I would recommend trying it out!

Here are some of the hesitations I had about going to a conference as a trainee, with my reasoning as to why you should consider it:

Essentially, although it can be challenging to fit conference attendance into a busy training schedule, it’s another way to learn and therefore well worth considering.