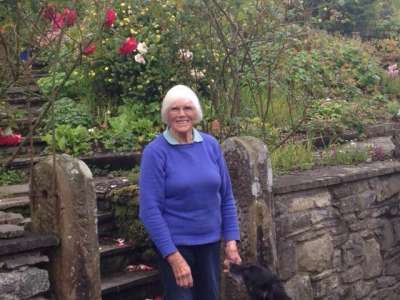 Some of you may wonder why the special guest presentation at the PMG Conference is called the Aldersea Lecture; others of you will know that it was named in honour of one of PMG’s founder members, Patsy Aldersea, pictured right.

Below, Ros Ham, a friend and colleague of Patsy Aldersea, and herself a previous member of various PMG committees, outlines Patsy’s contribution to the field, which led PMG to honour her in this way:

Patsy Aldersea, an experienced occupational therapist, was instrumental in the development of the NHS wheelchair and special seating services following the McColl report of 1986. Services had previously been located at Artificial Limb and Appliance Centres (ALACs) but, following the report, management of the ALACs moved to the Disablement Services Authority (DSA) which ran the project of transferring services to the NHS regions by 1991.

The role of the therapist increased in this clinical area with work-based ‘tools’, training - both local and at higher education level - job opportunities, scientific meetings, texts, papers, references and, in 1992, the birth of PMG.

Patsy was key to these developments, working with the ALACs, the Department of Health (DH), professional bodies, academic departments, and multidisciplinary team members. She was senior therapist at the Roehampton service when seconded to the DH as part-time coordinator for the two DSA project committees, which had direct responsibility to the Minister of Health. Patsy thus gained an overview of services as they expanded nationally, and was always willing to help in their development. She was a delightful person to work alongside, and highly regarded by all members of the multidisciplinary team. We have to thank Patsy Aldersea for all her hard work in getting us to where we are today, and it is fitting that her contribution to the field is recognised annually through PMG’s guest lecture.

Patsy gets in touch with PMG from time to time, most recently sending the below email just before the PMG Conference 2016. It was in response to an ebulletin about the Annual General Meeting, which had also mentioned the new Speed Networking event taking place on the Monday before conference proceedings began. It gives us a glimpse of Patsy’s indomitable character and zest for life, highlighting also how she takes for granted that contributing to the greater good is part of everyday life, long into retirement.  (Photograph of Patsy taken by her granddaughter Elina).

It’s always good to see your name and know that you are still coping with PMG!  I would love to participate in the speed networking event. Unfortunately, we are one of the 5 percent of the country who are not going to get fast speed broadband - getting it at all is very hit and miss, as we all bounce off each other’s homes! We are currently all working to raise enough money for a German firm to put a fast speed fibre in all the local villages -  very primitive here, and better really to own a few homing pigeons.

Hope you are well and enjoying life. I think of you all often and Ros (Ham) keeps me in touch with any special news. I am in touch with some disability matters as am a trustee for the Lakeland disability support group - a sort of offspring to the Windermere Leonard Cheshire Home; I’m also an ex-trustee (now a volunteer and gardener!) for the Bendrigg Trust which is in Old Hutton and does residential holidays for disabled and disadvantaged young people - it’s a great centre, and very popular with many of the Northern special schools, and a few that come up from the South of England too.

Still manage to play tennis once a week, weather permitting, and badminton once a week - a great laugh! Also busy with grandchildren and aged relatives. Have just come back from Scotland - was looking after my youngest daughter's four children - ages 4, 6, and twins of 8 - while she did an Iron Man in Austria. She has been invited to do the triathlon for Team GB in the European games later in the year, but has damaged her cruciate ligament so am not sure if she will make it, but has been sent the kit!!!

Must go and get a cake out of the oven as I can smell it is well done.

We were delighted that in his 2016 Aldersea Lecture, Ray Hodgkinson MBE, paid homage to Patsy’s life and work. Ray’s speech is packed full of interesting information related to the posture and mobility field, and we have great pleasure in publishing it in the PMG online journal for your enjoyment and for its historical value. To read Ray's speech, please click here.