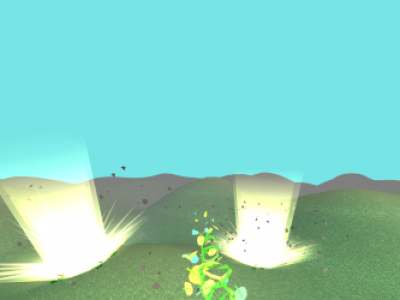 There are many barriers that people with disabilities face when trying to access leisure activities. For young people with mobility disability in particular, access to physical play is often limited (King, et al., 2009), an activity that is an important step in the development of physical and social skills (Taub & Greer, 2000). While often sedentary in nature, due to their adaptivity, video games offer an interesting opportunity for inclusive play that could help address this issue. Here, the potential of movement-based gaming technologies (e.g., Microsoft’s Kinect camera system, and Nintendo’s Wii controller) is discussed as a way of designing inclusive, physically challenging play that opens up new opportunities for young wheelchair users.

Over the last couple of years, the games industry has developed a number of movement-controlled console systems. Most notably, Nintendo released its Wii console that allowed users to control games through arm movement using the Wii Remote, a wireless game controller equipped with accelerometers that can track the velocity with which it is moved by players. Taking this concept one step further, Sony and Microsoft developed camera-based tracking systems, with Sony taking a remote-based approach, and Microsoft introducing the Kinect camera as a means of delivering hands-free input that allows players to use their entire body to control games. However, unless games support seated play, all of these technologies can be challenging for wheelchair users, because the extent of physical activity may be limited to upper-body movement while remaining otherwise stationary.

There are a number of research prototypes that have explored how wheelchair movement can be integrated in playful applications. For example, AstroWheelie (Cuzzort & Starner, 2008) attaches the Wii Remote to the wheelchair to obtain movement information for an Asteroids-style game that is experienced through a head-mounted display, similar to today’s commercially available virtual reality headsets. GAMEWheels (O’Connor, et al., 2001) is a system that connects wheelchair propulsion with gameplay through a custom-designed treadmill interface with the goal of motivating wheelchair users to engage in physical activity. Evaluation results show that the system improves exercise intensity, outlining the potential that games have to support physical activity among wheelchair users.  Further adapting Microsoft’s Kinect controller, a set of games has been created for use with manual and powered wheelchairs alike (Gerling, et al., 2016). Games include a skiing simulation, a robot boxing game, and a sensory experience that adapts the environment based on wheelchair movement (see Figures 1-3).

Initial research results show that wheelchair users with different levels of control can interact with the games, but that differences in wheelchair control in the real world carry through into performance in virtual settings. Beyond access and usability, there is evidence that wheelchair-controlled play gives young wheelchair users a sense of recognition and being catered for. This opens up new, positive perspectives on the wheelchair as an assistive device directly integrated in gameplay, and offers potential for empowerment through digital play that includes the wheelchair rather than working around it.

Wheelchair-controlled video games offer the opportunity of creating new spaces for physical play for young wheelchair users. Beyond providing physical challenge, games can also foster inclusion by adapting to players with a broad range of ability. However, they need to be designed carefully to adapt to different players to avoid instances of vulnerability, for example if different levels of wheelchair control impact how well players can interact with the game: games can only provide empowering experiences if we can create a level playing field, and challenge individuals adequately.

King, G., Petrenchik, T., Law, M., and Hurley, P. 2009. The Enjoyment of Formal and Informal Recreation and Leisure Activities: A comparison of school-aged children with and without physical disabilities. International Journal of Disability, Development and Education, 56(2), 109-130.