Standing in the wings 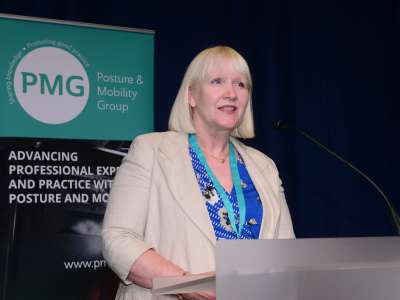 As an occupational therapist having worked in wheelchair services for 18 months leading up to the PMG Conference 2019, I was thrilled to be awarded a bursary to attend the event.  In return I chose to submit a short report on the plenary presentation “Standing in the wings” by Anne Duffy, in which Anne (pictured) gave a heartfelt description of her experience as the parent of a child with Duchenne’s muscular dystrophy (DMD).

Anne’s son, Andy, who is now 27 years old, was diagnosed with DMD at the age of four. Anne chronicled Andy’s life, punctuated by photos and videos, many of which included his older brother Peter. She described some of the initial symptoms of DMD she'd noticed in Andy, the anxiety felt while waiting for a diagnosis, her fight to ensure that Andy went to mainstream school, and the bureaucracy involved in accessing appropriate equipment and adaptations.

It reinforced for me the impact that health, social and educational professionals have on a person’s life, with Anne recounting interactions which were either particularly positive or negative. It was clear that her sense of humour and patience had been tested on many occasions.

As a wheelchair occupational therapist, I was very interested when Anne began to discuss the various wheelchairs her son had used.  She described how initially he was not entitled to a powered chair because their home had not been adapted. A number of years later, when Andy started secondary school, he was issued with an NHS powered wheelchair which gave him some independence but, unfortunately, sounded like a milk float and also required him to lean forwards in the seat to use the controller.

This was eventually replaced with a Golf chair via Kate Fox (physiotherapist) who had started a neuromuscular charity in Winsford.  It was an improvement on the previous chair, and enhanced Andy's quality of life, but his best powered wheelchair by far was funded by Caudwell Children, and was fitted with a riser function. This enabled Andy to reach the tables in the science labs, and to take part in social activities such as watching his beloved Stockport County, allowing him to rise with the crowd when his team scored a goal.  It was great to hear what a difference the right piece of equipment can make to a person’s life.

Working in an NHS wheelchair service there are limits to the types of equipment we can prescribe, and I often signpost families to Caudwell Children. Signposting patients, families and carers to other organisations which may be able to assist them is vital to the role of a wheelchair clinician, and my colleagues and I endeavour to keep up-to-date with information about potential funding providers, either general or condition-specific, to whom patients can apply for more suitable equipment.

Anne also told us that some of the most valuable assistance had been offered by the family care officer from the Muscular Dystrophy Campaign, who provided information and support when she encountered what seemed like never-ending battles against bureaucracy, for example accessing home adaptations, and a more recent issue around care charges and maintenance costs for home equipment. This emphasised again the importance of signposting or referring on to condition-specific organisations.

As clinicians we need to remember that, although an appointment at wheelchair services is about the patient, they, their family and carers are a team, therefore it’s essential that we consider the needs of the whole team, and check that carers are also receiving support.  This could include referring siblings to young carers’ groups or hospice sibling groups, and providing parents and carers with contact details for support groups.  Anne identified that both she and her sons would have benefited from mental health support during the transition from child to adult services, but this had not been available.

She concluded her presentation by performing a monologue she had written (Anne is a playwright): it was a trilogy of answerphone messages left by her character Lily Drake for a therapist who had made a positive difference to her son Steven’s life; thanking the therapist for the small gestures which had been invaluable to Steven’s progress, but also wanting to share that he had settled down and recently become a father.  The closing line of Lily’s final answerphone messages is:

“They wanted me to tell you that they named the baby after you”.

This powerful performance was a beautiful reminder of the privileged position we occupy as therapists, and what a difference we can make.

Members of PMG can view Anne's presentation by clicking here.