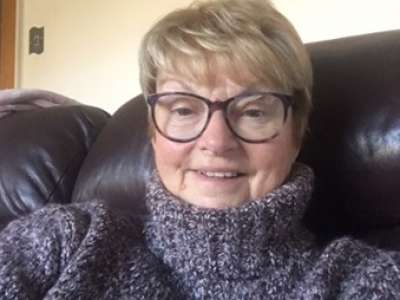 This article reviews one of the many research projects funded by PMG between 2005 and 2019. The project was undertaken by physiotherapist Linda Walker (pictured right), and was completed in 2013 when it earned her a PhD from the University of Brighton. The project examines the process of how people come to accept wheelchair use into their lives and, as such, is of perpetual relevance, irrespective of equipment and technological advances.

The project focussed on ten people who depended on a wheelchair for all their mobility needs on a permanent basis. In contrast to quantitative research this project did not start with a theory and test it through experiment. It used the qualitative methodology of Dimensional Analysis, a guided approach to organising and analysing observations, using the participants’ experiences to create a “coherent theory of wheelchair use”.

The starting point for the data was information such as age at time of study, age when wheelchair use started, type of wheelchair used etc, as well as transcripts and recordings of conversations with the participants. Each conversation started with the same request from the researcher:

“Please tell me about your life as a wheelchair user.”

This approach allowed each participant the freedom to talk about the things that were most important to them, rather than constrain them to answering a predetermined list of questions.

The researcher began the process of dimensional analysis by closely examining the data to identify ideas and themes, and progressed to developing and mapping them against existing theories - such as those found in the literature. This meant the researcher necessarily made decisions based on her own interpretation of the participants’ interactions in the meetings, which shaped the progress of the research, and consequently the final conclusions. The researcher acknowledged the potential for subjective bias, maintaining a structured approach and an awareness of this possibility, which are two strategies employed to minimise the impact of this potential bias.

The dimensional analysis then proceeded cyclically with the researcher testing the emerging theory against the existing data and modifying as necessary. Where information was missing (perhaps because a particular participant didn’t discuss some aspect of their lived experience relevant to a developing theory) the researcher returned to them to fill in these gaps. This is a process known as theoretical sampling. The technique was employed in this study to build the most complete data set possible, relevant to the developing theory. A key feature of the dimensional analysis approach however is that the data determine how the research progresses. This was something which happened in this study and Linda reports that, after the first four interviews, her perspective had already been changed to put a greater emphasis on how each person viewed their independence and autonomy, and how they felt that wheelchair use had changed them.

The study’s ultimate achievement is its theory summarising the process of accepting a wheelchair in three stages: becoming, embracing and being.

The first stage is becoming, which is when the individual comes to depend on a wheelchair to meet their mobility needs. The theory identifies the following six features (or dimensions in qualitative research parlance) of their experience, perspectives and circumstances that influence the way in which the individual navigates this stage:

It was notable therefore that, in respect of dimension 5 above, the participants with more positive experiences of wheelchair use, through their own careers as healthcare professionals, negotiated the route to wheelchair acceptance more readily than some of those who did not. Similarly, one of the participants who had changed his career consequent to his need to use a wheelchair, had experienced marked biographical disruption (dimension 4) which delayed his acceptance of a wheelchair.

The next stage in the acceptance process is embracing. This was identified as having five dimensions:

Once again, the experiences of the participants illustrated the importance of these factors. The individuals who had adapted their home environments (dimension 4) to improve their functioning were more positive about wheelchair use than those who had not, and it was a similar story for the people who learned new skills (dimension 2). For example, there was a notable difference between those who acquired their disability suddenly, through spinal cord injury, who learned wheelchair skills as part of a structured rehabilitation programme, and those whose disability developed more gradually and so had not necessarily received support with this.

The embracing stage, however, includes dimensions relating to the individual’s self knowledge and their emotional responses, as well as more practical aspects. Experienced wheelchair service clinicians would, I’m sure, already be well aware of the practical necessities for success, but dimensions 1 and 5 are, arguably, not so easy to identify and support.

The thesis describes one participant’s recollection of feeling invisible when a friend failed to notice him when he was out with his wife “…we were going round and somebody said that looks very like Marjorie…oh it is you, where’s Patrick? And I was by her side and they hadn’t even seen me.” This person appeared not to have developed an effective coping strategy to deal with such setbacks. This is contrasted with another participant who had similar experiences of feeling unseen but demonstrated a different response. “…  people don’t notice me in a wheelchair because you’re out of eye line, and a number of times in shops people walk into me.. we have a few collisions.. they crash into me…it doesn’t really worry me, but I think that my background as a nurse has helped.”

The final stage of the process is being. It also has five dimensions which are as follows:

At this final stage the individual has resolved any discrepancies between how they see themselves and their actual situation. Such a discrepancy is termed ontological dissonance, and an example of this is when the person continues to identify as someone who walks. The development of a life map which acknowledges and includes the wheelchair is therefore also a key feature of this stage (dimension 4), as is the participants’ relationships with their wheelchairs (dimension 1). It was interesting to read how this ranged from embodiment, where the wheelchair was regarded as a part of who the person was, to detachment, where the wheelchair may become the focus of blame. The study found that not all of the ten participants had reached this stage, and it was noted that some people may never fully accept a wheelchair into their lives.

There is certainly a great deal more to this study than I have been able to consider in this short article, but I hope it has whetted your appetite to find out more. I would certainly recommend that anyone involved with wheelchair services reflects on the conclusions of this study, and reads more about it in the original thesis which is available to download from here.

Although necessarily a piece of formal academic writing, the chapter on the findings of the study is an especially accessible account of how the experiences of the participants mesh with the stages and dimensions of the theory.  I’m also sure many people will recognise aspects of the study participants amongst their own service users, and will be able to compare their own perspectives with that which underpins this work. It may also assist clinicians by providing a more formal framework for understanding the factors which make the difference between success and failure in wheelchair provision.