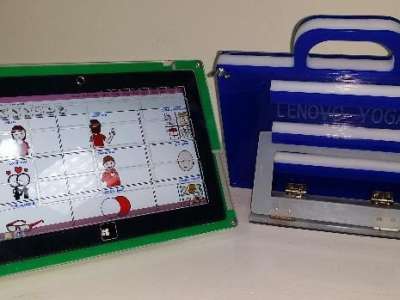 After finishing the Scientist Training Programme as registered rehabilitation engineers, we sought an opportunity to put our three years of knowledge and skills to a charitable purpose. We identified the Institituto Nuevo Amanacer (INA) in Monterrey, North Mexico, as a place where our background and skills could be useful.

INA is a charitable institute for children and young adults with cerebral palsy which brings together medical, education and therapy services (such as postural management, physiotherapy and speech therapy), alongside recreational activities. The staff have created an institute which integrates these various services to create a very friendly, welcoming, and social environment for the users and their families.

Our first impressions of INA were extremely positive: we were impressed by how well-resourced they are, in terms of services and equipment.  This is largely a result of the work carried out by a UK-based charity, MeDiCT (Mexican Disabled Children's Trust). MeDiCT’s founder and occupational therapist Sarah Davies introduced and developed a sustainable postural management programme during the two years she spent at INA in 1999. INA now has a fantastic postural management clinic and manufacturing workshop in their Centro de Atención Postural (CAP), and MeDiCT continue their support by sending equipment, donated and refurbished by Specialised Orthotic Services (SOS), and MeDiCT volunteers, to deliver training.

A number of children at INA require communication aids, for which INA have received several donated tablet computers. Only a handful of these tablets were being used - the rest were stored in a cupboard. It was clear that there was an obstacle preventing the intended use of the tablets, and it became our work to find out why, and resolve this.

Our first week at INA involved observing classes and therapy sessions, and speaking to staff to find out first-hand how the tablets were being used. We observed issues such as the users relying on therapists to hold the tablets during sessions, or the tablets being insecurely Velcroed or cable-tied to trays.

Following our observations and feedback conversations, we developed a list of final requirements for the design, which were as follows:

Our design work started in the UK with the help of Paul Hewett, an engineer based at the ACE Centre, Oldham, who has previously worked with INA and who put us in contact with the staff there. With their feedback and Paul’s input, we started designing a solution.

We developed an initial prototype in the UK, which fully housed a tablet device and kept external cables out of reach. The casing also had the option of a key guard and speaker for individuals who required these. These types of cases are commonly used in the UK; however they can often cost significantly more than the tablets themselves. We had to ensure our solution was low-cost to be feasible and sustainable within INA.

We worked with a local company Bioana to laser cut further prototypes. Bioana is a medical technology research and design company established by a trio of inspiring young female biomedical and clinical engineers. These prototypes were reviewed during organised drop-in sessions, from which we obtained vital feedback.

Final prototypes, named Capsulá (Spanish for capsule), were tested with the children we had observed in our first week. We noted how the teachers, therapists and children interacted with the device, and were pleased with the outcome and feedback received.

Capsulá was a success! Therapists reported that it had made their therapy sessions much easier, and the children were seemingly getting less frustrated by the use of key guards. Capsulá enabled the children to use the tablets independently of the therapists.

As a design project we were pleased that within 6 weeks we had developed several prototypes, finalised our design, and successfully implemented this into clinical services. All materials and manufacturing were sourced either locally or within the institute. Establishing these links was tricky at times because of the language barrier and calculating dimensions in different units!

Technical documentation was also completed, including manufacturing instructions to ensure the sustainability of Capsulá.

We would like to thank Sarah Davies for facilitating this work, and for her support throughout the project. Thanks also to Paul Hewett and Peter Watt for their design and technical input. Finally, thanks to all the staff at INA, especially those in the CAP workshop for their help and advice during our time with them.