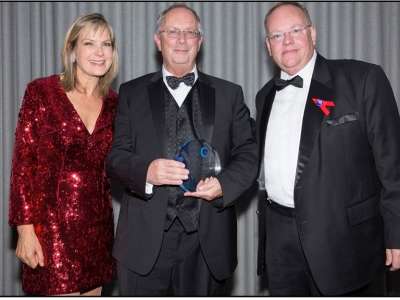 As several of you will know, Barend has been a member of PMG for many years, and played a key role in its growth during his tenure as treasurer and membership secretary of the group.  He was tireless in his efforts to expand the membership, and it grew four fold over this period.  Barend also helped create the successful template for our annual conference/exhibition and, together with his wife Alison, co-ordinated numerous PMG conferences from their (then) home in Cambridge where BES was based before relocating to the current headquarters in Bristol.

Barend also instigated and co-chaired the International Conferences of 2005 (Exeter) and 2010 (Glasgow), and oversaw the production of the Best Practice Guidelines (BPGs) which underpinned the 2010 event. Many of the BPGs are now published on the PMG website, available by clicking here.

Barend stood down as PMG treasurer in 2006, but continued on the Executive Committee for another term and on the Finance Sub-Committee for several years. He was also a member of the PMG Editorial Sub-Committee (later re-named Publications & Marketing), often helping out with proof-reading and providing articles for the journal.  Barend is always willing to go above and beyond in his support of PMG, currently processing the staff salaries through BES’s payroll, for which we are extremely grateful!

Alongside his voluntary work for BHTA and PMG, Barend has been part of the International Organization for Standardization (ISO) seating standards committee since its inception in 1998, leading the group for flammability standards published in 2012 and 2014.  He also led the ISO standard on guidelines for pressure mapping, and is currently working on standards for positioning belt placement, and for seating related attachments to wheelchairs.

In acknowledgement of his contribution to PMG and to the field generally, Barend was invited to present the Aldersea Lecture at the group’s 20th anniversary conference in 2012.  You’ll be glad to know that the lecture was video recorded, and can be viewed by clicking here.

We are delighted, therefore, that BHTA presented Barend with the Life Time Achievement Award this year. Congratulations from all at PMG!